The 10 best things to do in alluring Great Bend

America’s largest inland marsh, Cheyenne Bottoms allures vast flocks of birds to Great Bend. Especially during spring migration, the Bottoms are a mecca for migratory and upland bird species. So many birds come that the Bottoms are a Wetland of International Importance. The Bottoms and Quivira National Wildlife Refuge headline the Wetlands and Wildlife National Scenic Byway, one of only two national scenic byways in Kansas. Great Bend is the largest city on the byway, so Make Great Bend your home base.

The birds agree: Great Bend should allure you, too. And it’s one of our top 12 Kansas destinations.

Explore Great Bend hosted me, but all opinions are my own.

How Great Bend got its name

Great Bend derives its name from the Great Bend of the Arkansas River. (In Kansas, the river’s name is Ar-KAN-zus.) The river starts its journey running southeast and then turns to the north before returning to its southeasterly course. Great Bend stands at the turn’s apex, in the state’s center.

1. Begin your birding adventure at the Kansas Wetlands Education Center

Start your Cheyenne Bottoms birding adventure at the Kansas Wetlands Education Center. The center explains the various species of birds and other wildlife in the area, plus offers activities that explain the water cycle, watersheds, and more. My favorite is the sandbox. Building a landscape is ultimately relaxing. To relax more, stand at the windows and look through spotter scopes.

The gift shop holds an excellent selection of books, souvenirs, and wildlife watching supplies. Buy the new children’s book about Ava the Avocet by the center’s Mandy Kern. Outside, walk the George Stumps Nature Trail.

2. Delight in the wildlife at Cheyenne Bottoms

The best way to experience Cheyenne Bottoms is to join one of the center’s tours. We recommend the Deluxe Tour because it focuses on identifying the birds and other wildlife you’ll see. After the tour, explore the Bottoms on your own. Don’t hurry. The recent bird sightings page gives a preview of what species are currently visiting. Before you go, print a species checklist and map.

Pro tip: Bring binoculars, spotting scopes, and your DSLR with its longest lens. Cell phone cameras are inadequate. Appoint a spotter. Spring migration is the best time to visit.

Broken wings are a raptor’s most common injury. The Great Bend Brit Spaugh Zoo’s Raptor Center offers birds of prey a chance to heal from their injuries, whatever they may be, and learn to fly again. When they are ready to live free, the raptor center releases them into the wild. Learn about the birds and their care at the zoo.

Lions, and cougars, and bears, oh, my!

See more birds, plus reptiles, amphibians, invertebrates, and mammals at the zoo. The African serval, the binturong, and the African crested porcupine are our favorites.

When spring migration is in full flow, the birds’ calls roar. If engine roars are your go-to sound, head to the Scra Dragstrip at the Great Bend airport. The race schedule starts at the end of May and continues through September.

SCRA hosted the first National Hot Rod Association (NHRA) Nationals in 1955. The dragstrip had been a runway for the Army Air Force’s B-29 training. After the military declared the airfield as surplus in 1946, the City of Great Bend acquired it. The club held the first races in 1953.

A different kind of engine roar filled the air over Great Bend during World War II. In 1943 and 1944, 11-man crews trained to fly B-29 Superfortresses at the Great Bend Army Airfield. The intersecting arches represent the 20th Air Force. Looking up 16 feet to the arch’s top provides a view through a B-29’s nose. Terry Hinde of Julesburg, Colorado, sculpted the memorial’s detailed 1:12-size B-29 model. 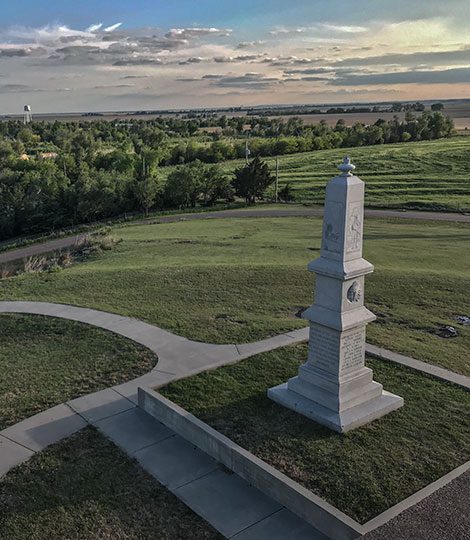 6. Follow the flow of trade on the Santa Fe Trail

Long before B-29s filled Great Bend’s skies, mules and oxen pulled creaking wagons on the Santa Fe Trail as roaring teamsters “encouraged” them. The Arkansas River’s bend began a perfect trading route to Santa Fe, New Mexico. The trail entered the Arkansas River Valley around Great Bend and followed the river’s course through Dodge City. Teamsters could stay near the river on the Mountain Route or turn southwest on the Dry Route to pass near present-day Garden City. Learn more at the Barton County Historical Society and Village.

Explore several trail sites around Great Bend. Walnut Creek Crossing was two miles east of Great Bend on the south side of Highway 56. Four people owned the trading post. Two of them died violently. Cheyenne and Arapaho warriors burned the post in 1868. Its owner abandoned it the next year.

The Army established Fort Zarah near the crossing in 1864. Commanding officer Gen. Samuel R. Curtis named the fort for his son, Maj. Zarah Curtis, who had died in the Battle of Baxter Springs in 1863. In 1866, the Army abandoned the fort, then rebuilt it about half a mile away two months later. They abandoned it again 3.5 years later. Neither the fort nor the post remains.

Find stone trail markers at Santa Fe Trail Park at 10th and Frey Street and at the Barton County Courthouse.

Pawnee Rock, 20 minutes southwest of Great Bend, marked the trail’s halfway point. It nearly met the same fate that doomed the fort and the trading post. Railroad builders and settlers carved stone from the rock, reducing it from about 100 feet high to 50 or 60 feet. Instead, the Woman’s Kansas Day Club saved it and gave it to the state. More than 8,000 people came to the monument’s dedication in 1912.

Pro tip: Climb to the top of the pavilion for an excellent view of the City of Pawnee Rock and the Arkansas River Valley. The spiral staircase is very narrow, and its turns are tight.

7. Pursue the Arkansas River on the Hike and Bike Path

While the modern road network has paved over the 200-year-old Santa Fe Trail, trail lovers may bike or hike next to the Arkansas River. A trail (PDF) tops Great Bend’s levee network. It runs 7 miles on the levee, but remember that it lacks trees to provide respite from wind and sun.

Every year, Great Bend Community Theatre‘s volunteer artists perform a slate of plays for their audiences. Kansas City-based Commonwealth Theaters built the Crest as a movie palace in 1950. The three-story building includes Art Moderne influences and featured a heated sidewalk to melt snow.

Jack Kilby became interested in electronics when an ice storm knocked out power around Great Bend. With power down, ham radio was the only way for his father’s electric company to communicate with customers who needed their power restored. Jack began experimenting with ham radio and then electronics in general. In 1958, Kilby joined Texas Instruments in Dallas. While working at TI, he invented integrated circuits, handheld calculators, and thermal printers. He also contributed to solar power research. He held more than 50 patents.

In 2000, Kilby received half of the Nobel Prize for Physics. The prize is only the most prestigious of his numerous awards. Kilby died on June 20, 2005.

Great Bend unveiled a sculpture of Kilby with two children, “The Gift,” in front of the courthouse on April 20, 2012. Look for quilt blocks inlaid into the courthouse sidewalk. See Kilby artifacts at the Barton County Historical Museum.

The nation has numerous wineries, but only one employs those with developmental disabilities. Rosewood Winery produces nearly two dozen delicious wines, all named for Rosewood Ranch horses. Our favorite is the Daisy Duke Green Apple Riesling. Beyond wine, choose Rosewood Studio’s specialty meats, jellies, honey and crackers, bath products, candles, and horsehair pottery. We recommend their chocolates and the Cowboy Candy, made from Rosewood’s homegrown peppers. Buy them at Rosewood Wine Cellar.

Any store named Miss Pretty Pickles has to be a fun place, right? Yes, that’s right. The twin stores offer adorable gifts, clothes, and food for humans and pets. Plus, they sell our book Midwest Road Trip Adventures! Stop in and buy an autographed copy.

If you enjoy any game, you must visit MindSculpt Games. The store carries more than 200 different board games, an astounding variety. And if you can’t decide which one you want, rent one. Create your own world with their miniatures, and delve deep into role-playing games.

Fill your home at Miller’s of Claflin, the furniture superstore

Downtown Claflin, 19 miles northeast of Great Bend, seems to be filled with numerous stores. But all those storefronts belong to a single company, the vast furniture mart Miller’s of Claflin. With more than 100,000 square feet of showrooms, they advertise the largest selection from Kansas City to Denver. Other than appliances, you won’t need to stop anywhere else to furnish your home. Delivery is free anywhere in Kansas.

Where to eat and stay

Start your morning at Great Bend Coffee. Go on Thursdays for their stuffed French toast. At Delgado’s, ask for the half-and-half chips made from flour and corn. Eat the Beaver and finish up with Mexican ice cream. Don’t miss The HandleBar, Great Bend’s biker bar. Order their hot beef sandwich. Try the yellow curry, hot and sour chicken soup, and the fried banana at Sarocha Thai.

Pro tip: Ask for a room that opens onto the courtyard, with an interior hall. Or reserve a room with a hot tub.

Mushroom Rocks State Park, one of the best rock formations in Kansas, is northeast of Great Bend. Explore the nation’s first agriculture-themed byway, Land and Sky, and the Western Vistas Historic Byway.

If you drive Highway 281 3.5 hours north of Great Bend, you will reach one of the other great American historic trail routes, the Great Platte River Road through Nebraska. Go south 10 hours on 281 during the spring for Texas wildflowers and President Lyndon Johnson’s ranch. 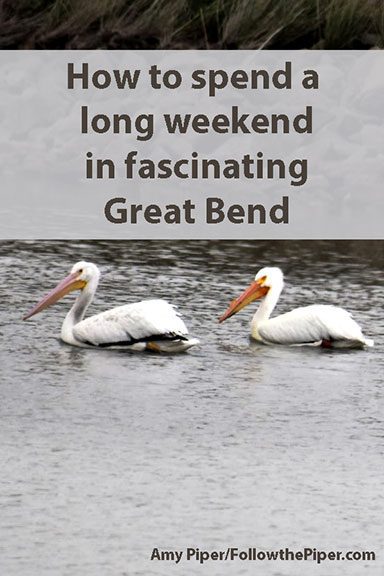