What do Haiti, Florida, and Texas, and a piece of cardboard have to do with Kansas geography? Everything.

Before Old Glory reigned over all of Kansas, four other flags waved above the state: Spain, France, Mexico, and Texas. Even after the United States gathered the entire state, political and surveying issues muddied its boundaries. Kansas geography could have extended to the Continental Divide and the Platte River’s southern bank.

A government scientist cut out a cardboard map and balanced it on a pencil to determine the geographic center of the Lower 48.

We’ll explore who formed Kansas geography and where to find the markers that tell its story. Plus, we’ll visit the state’s center, high and low points.

Because of Haiti, Napoleon decides to sell Louisiana

In 1803, French Emperor Napoleon Bonaparte needed money. He was losing the wealthiest French colony, Saint Domingue, now Haiti, to a rebellion. Without Haiti, Louisiana was expendable — or so Napoleon believed.

President Thomas Jefferson wanted to buy only New Orleans, but the US quickly accepted the emperor’s offer for all of Louisiana. For four cents an acre, the United States received all or parts of 15 states, including most of Kansas.

Spain exchanges Florida for Texas, including a piece of Kansas geography

No one understood the Purchase’s boundaries. The Americans thought the Purchase included all of Kansas, but the Spanish disagreed.

In 1810, West Florida’s settlers rebelled against Spain. President James Madison used the revolt to claim the region. He said it was part of the Louisiana Purchase. Secretary of State John Quincy Adams and Spanish diplomat Luis de Onís negotiated the Transcontinental Treaty. The treaty gave East Florida to the Americans and defined the Purchase’s western boundaries. In exchange, the US recognized Spain’s sovereignty over Texas.

The treaty said Texas included a chunk of Southwest Kansas. At the 100th meridian, the Arkansas River became the Texas boundary. That meant everything southwest of later Dodge City was part of Spanish Texas.

Eventually, Mexico revolted against Spain, and Texas left Mexico. The Americans annexed Texas. Southern Dodge City was still Texan, but not for long. In the Compromise of 1850, Texas surrendered all its land north of 36º, 30′ North, in exchange for the US government paying its crippling debts.

Because Texas was a slave state, and the Missouri Compromise had set 36º, 30′ as slavery’s northern limit.

Will Kansas geography be big or little?

Through four constitutional conventions, delegates fought about the boundaries. Some Big Kansas proponents wanted to keep the Colorado portion of the territory. Others wanted to grab southern Nebraska. Some wanted both. But those who desired a Little Kansas prevailed, ensuring the state’s current boundaries.

Territorial Surveyor General John Calhoun hired John P. Johnson to survey the Kansas-Nebraska border. He was dubious about Johnson’s abilities, but his bosses had pressured him into the decision. Johnson had also applied for Calhoun’s job, and the bosses wanted to appease Johnson.

They hired Thomas J. Lee to mark the 40th parallel as Johnson’s starting point. Lee pounded an oak stake into a bluff above the west bank of the Missouri River.

Johnson surveyed 108 miles from Lee’s marker in 20 days. He set the Sixth Principal Meridian’s Initial Point on December 5, 1854. He reported the completion to Calhoun in his Springfield, Illinois, office. Without checking Johnson’s work, Calhoun paid him on January 12, 1855. When Johnson’s equipment returned, Calhoun found that the compass was misaligned.

Cleaning up the northern border

In April, Calhoun hired Charles A. Manners and Joseph Ledlie to survey the First Guide Meridian East (PDF). It is a north-south baseline 60 miles east of the initial marker. Manners and Ledlie’s crew replaced the oak stake with the Cast Iron Monument. They also had to check Johnson’s baseline.

The expedition began poorly. An Indian ferried the crew across the river in a canoe. He brought the last eight men with the 600-pound monument. The weight and wind threatened to swamp them, and some of the men couldn’t swim. They were terrified, but they crossed safely.

At precisely noon on May 8, 1855, the crews installed the monument and began surveying. They quickly realized that Johnson’s line meandered west. At 12 miles, it was already one-quarter of a mile off. At 60 miles, it was three-quarters of a mile south.

Manners and Ledlie had to re-survey Johnson’s line. Afterward, they established the First Guide Meridian East, and then the crews split up to survey more of the guideline. Ledlie’s crew went south, and Manners’s went north.

For the rest of his life, Johnson denied that his survey was inaccurate. His epitaph in the Highland (Kansas) Cemetery says he surveyed the line.

To see the monument on Glacial Hills Scenic Byway‘s northern end, park at the turnout in front of the Nebraska historical marker. Look north of the turnout for the unmarked pedestrian bridge on the road’s west side. The trail to the top is lined with railing, but beware. Some of the posts have fallen, leaving some rail sections unsupported.

The corrected Initial Point settles Kansas geography on the north

A year later, Manners placed the Sixth P.M.’s Initial Point 2.18 miles north of Johnson’s placement. The current monument is a Colorado granite obelisk. Wyoming and Nebraska rocks form its base.

Calhoun hired another crew to remove Johnson’s monuments. Eventually, all of Kansas’s borders were settled.

How to find the four corners of Kansas geography

From Main Street in White Cloud, turn north at the Four-State Lookout sign in the park. Climb the stairs to the platform.

Route 66 and the tri-point

To find the southeast corner, look for the Downstream Casino. The tri-point is at 118th Street’s end near Route 66. 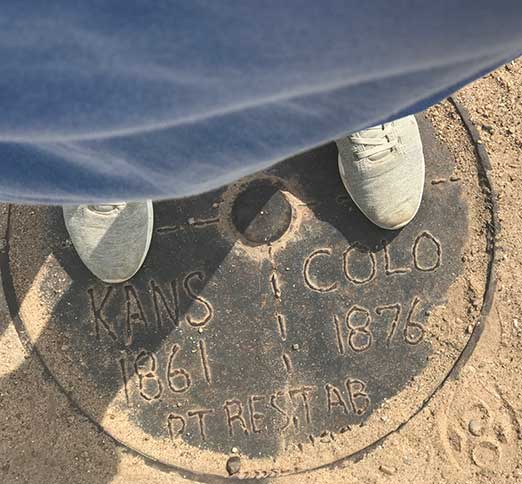 Stand on Kansas, Colorado, and Oklahoma southwest of Elkhart.

The southwest corner of Kansas geography

A windmill used to adorn the southwest Kansas tri-point, but it blew down in 2017. Follow these directions.

Land and Sky Scenic Byway and the northwest corner

Check the weather and download a map before seeking the tri-point northwest of St. Francis. Colorado’s lowest point is nearby on Land and Sky Scenic Byway.

Highs and lows of Kansas geography

The state’s lowest point is at 679 feet, where the Verdigris River enters Oklahoma at Coffeyville.

Meeting in the middle

Before Alaska and Hawai’i became states, Oscar S. Adams of the US Coast and Geodetic Survey cut out a cardboard map. He placed it on a pencil and moved it until the map balanced. Lebanon rested on top of the pencil point.

A flagpole-topped cairn marks the center point. A picnic area and a small chapel are in the surrounding park.

In a way, Kansas is at the center of North America. North American geodetic surveys refer to the Geodetic Center. The actual point is on Meade’s Ranch, but a replica stands in Osborne.

The center of the center

Where is the center of Kansas? Let the birds guide you. Cheyenne Bottoms, Kansas’s center, is a mecca for migratory birds.

Now, you can say you know Kansas geography!

Now that you know Kansas geography, visit our dozen best places to visit in Kansas. Great Bend, St. Francis, and Dodge City are included. Another one of the dozen, Leavenworth, is the largest city on the Glacial Hills Scenic Byway. Besides the Center of the Lower 48 States, Smith County is home to another Kansas icon, the “Home on the Range” Cabin.

Explore more of the Midwest. 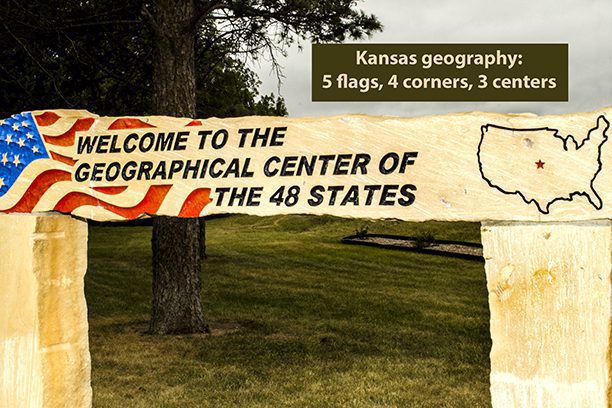