The top 11 fun things to do in Wichita

Ah, Wichita, city of dreams beside the Arkansas. (That sounds great, except Kansans call the river the Ar-KAN-zus.) Even though the tagline doesn’t rhyme in Kansan, dreams do take flight in Wichita, the Air Capital of the World. Here are the top 11 ways to live dreams in Kansas’s largest city.

Visit Wichita hosted me for some of the listed attractions, but, as always, what I write is my own opinion.

1. Let your dreams soar at the Kansas Aviation Museum

The Kansas Aviation Museum‘s main building began its life as the Wichita Municipal Airport. Finished in 1935, it’s full of lovely Art Deco details. During the war years, Wichita was one of the nation’s busiest airports. In 1944, planes landed or took off every 90 seconds. Legend says that Fred Astaire danced around the atrium while waiting for a flight. To experience the Air Capital, you must experience this one of the top 11 things to do in Wichita.

In 1991, after years of restoration, Wichita aviation enthusiasts opened the Kansas Aviation Museum in the former terminal.

Tour a world-class collection of aircraft and aircraft engines, including displays of Wichita-based airplane manufacturers such as Beechcraft and Cessna. View the Kansas Aviation Hall of Fame, including Olive Ann Beech and Amelia Earhart. Outside, stroll among a Boeing 737, an Air Force KC-135, a Learjet, and more.

As an aviation buff, I enjoyed the vintage planes and engines. But the highlight was climbing into the control tower. The tower offers 360-degree views of Wichita. While you’re in the tower, watch for planes taking off and landing at the adjacent McConnell Air Force Base.

In 1945, Mary VanScyoc, the nation’s first female civilian air traffic controller, saw that the airport’s main hangar was burning. She closed the airport and stopped all traffic, saving lives. Although no one died, the fire destroyed 27 airplanes and a fire engine.

VanScyoc has a brick in Wichita State University’s Plaza of Heroines.

Pro tip: Guests aged 55 and over receive half-price admission. Little Aviators, aged 1-12, receive a discount on Fridays from 10-noon. One adult companion gets in free.

2. Marvel at Doc, the B-29 Superfortress, and recall the Battle of Kansas

On March 9, 1944, Gen. Hap Arnold demanded an air force of B-29s by April 15. Kansas airplane factories delivered on time, winning the Battle of Kansas. Boeing’s Wichita factory made 4.2 B29s per day, 100 B-29s each month by the war’s end. The B-29s pounded the Japanese. Many of the workers were women, Kansas versions of Rosie the Riveter.

My father was an Air Force aircraft mechanic from 1956-60. I wished that he could have seen Doc with me.

Pro tip: Before visiting Doc, check his schedule. He often flies in air shows. When he’s flying, he’s not in his hangar.

3. Explore science at Exploration Place, one of the top 11 things to do in Wichita

Because Wichita is the Air Capital, Exploration Place includes an aviation science exhibit, Design Build Fly. I tried “flying” the Learjet from Wichita to San Diego — and missed the airport. Instead of landing safely, I crashed in the Pacific Ocean. Oops!

The exhibit enables guests to design an airplane seat, test landing gear, and rivet a wing. (Can we make airline seats a bit wider and the rows further apart?)

In the Explore Kansas exhibit, look for the jaw-dropping native grass under glass. Looking at the grass, roots and all, reminded me of an iceberg. Far more of the plant hides below the surface than shows above it. Also in the exhibit, safely spawn a tornado.

4. Stop and smell the flowers at Botanica, the Wichita Gardens

Even though Wichita is the Air Capital, the top things to do in Wichita include far more than aviation. Stroll through 17 acres of gardens at Botanica, the Wichita Gardens. Examine 28 different themed gardens within the grounds, including the Shakespeare Garden, the Chinese Garden of Friendship, and the Railroad Garden. Since machines were not the first to fly, Botanica includes the Woodland Bird Garden, the Butterfly Garden, and the Butterfly House.

5. See Frank Lloyd Wright’s renaissance at the Allen House, one of the top 11 things to do in Wichita

Before celebrity architect Frank Lloyd Wright had designed the Allen House, he had fallen into a slump. His designs were more cookie-cutter than stunningly original. And then, in 1916, Henry J. and Elsie (Nuzman) Allen commissioned him to design their home. At the time, Allen published the Wichita Beacon. The house was one of Wright’s final Prairie School designs, and it prefigured Wright’s later Usonian structures.

By the house’s 1918 completion, Allen sat in the Kansas governor’s seat. Later, he became U.S. Senator.

As you tour the home, look for more than 30 pieces of Wright-designed furniture, all of its original art glass, and innovations, like wall-hung water closets and an attached garage.

Reserve your house tours early because they often sell out.

Pro tip: Wright designed two Kansas buildings, and both of them are in Wichita. Corbin Education Center is on Wichita State’s north side. Many of the original furnishings remain in use. For the best view, approach the building from the south.

Before the Interstate Highway System and jumbo jets, people rode the train to cross the country. Sleeping on a train is a blissful experience, as the train’s gentle rocking and soothing sounds lull passengers to sleep. The dining car food was glorious.

Relive the glamour of rail travel at the Great Plains Transportation Museum, one of the top 11 things to do in Wichita. The museum’s Santa Fe steam locomotive #3768 and Santa Fe FP45 diesel #93 were some of the last passenger locomotives. Inside, enter the railroading world with numerous railroad artifacts.

7. Travel the world at the Museum of World Treasures

Can’t decide what you want at a museum? You’ll find what you’re looking for at the eclectic Museum of World Treasures. From the huge dinosaur with a toothy smile in the entrance to cultures ancient and modern to every era of American history, including the Hall of Presidents, the museum has intriguing treasures around each corner. And the three-story building has lots of corners.

The Museum of World Treasures is in Old Town, No. 7 in the top 11 things to do in Wichita.

After all that walking around, it’s time to put up your feet and dine in Old Town Wichita, one of the top 11 things to do in Wichita. However, deciding which lovely venue will satisfy your hunger and thirst can be difficult. I’d start with pizza at River City Brewing Co. In good weather, though, relaxing in Nortons Brewing Company‘s courtyard is paradise.

Sabór Latin Grille will save you huge sums of money. Instead of traveling to South America, savor the continent’s cuisine at Sabór.

To obtain a unique home décor piece, make an appointment to see Robyn at Uniquities. Register for an art class at Pinot’s Palette.

On Saturdays, shop at the dog-friendly Wichita Farm & Art Market.

9. Light the night on fire at the Keeper of the Plains

You have not been to Wichita if you haven’t experienced the Keeper of the Plains‘ 15-minute lighting ceremony. The 44-foot steel sculpture stands on a 30-foot pedestal at the Arkansas and Little Arkansas Rivers’ confluence.

The Keeper is a signpost for the Mid-America All-Indian Museum (MAAIM). Blackbear Bosin, a Kiowa-Comanche artist, crafted the sculpture above the center. MAAIM’s collection includes more than 3,000 artifacts so that visitors’ museum experiences will always be fresh. Support the museum and artists by purchasing a souvenir.

The bridge to the Keeper connects South Riverside Park to the 10.8-mile Arkansas River Trail. The trail is nearly flat and leashed-dog-friendly. MAAIM, Botanica, Exploration Place, and Riverfront Stadium are all easy walks or rides.

Pro tip: Look for the Wichita Troll on the Little Arkansas’s north bank.

Professional baseball has deep roots in Wichita. The first pro team played in 1887. Teams came and went until 2018. In May, minor-league baseball returned to Wichita when the Wind Surge opened at Riverfront Stadium. The Wind Surge is the Minnesota Twins’ Double-A affiliate in the Texas League.

While the minor leagues have shuffled teams into and out of Wichita, the National Baseball Congress has remained. Since 1935, the NBC World Series has brought baseball’s future to Wichita and Hutchinson.

Wind storms often bring thunder, in this case, the Wichita Thunder. The Thunder is affiliated with the Edmonton Oilers. They play in the ECHL, a Double-A hockey league. Their games are in the Intrust Bank Arena.

Kansas has three universities that play at collegiate sports’ highest levels, including Wichita State. The Wichita State Shockers offer 11 programs. In 1989, Shocker baseball won the College World Series. They were the CWS runner-up in 1982, 1991, and 1993. More recently, I danced for joy when Wichita State defeated the Kansas Jayhawks in the NCAA Men’s Basketball Tournament in 2015.

Pro tip: The Kansas Sports Hall of Fame inducted Gene Stephenson, who led the Shockers to collegiate baseball’s pinnacle, in 2014. The hall of fame is also on the Arkansas River.

11. Attend a show at an iconic theater

Carry on, Wayward Son. Hearing your favorite bands from way back when is a great way to reclaim your younger days. Or find an upcoming favorite. Either way, Wichita’s historic Orpheum Theater is the place to watch a show. The Orpheum was the first Atmospheric-style theater in the United States. It resembles an Andalusian garden, complete with shimmering stars in the night sky. It opened on Labor Day, Sept. 4, 1922, and was a major vaudeville destination. Restoration continues while the theater hosts major touring events.

In 1941, the historic Dunbar Theater wasn’t the sole Wichita place for Blacks to watch movies. Instead, the 340-seat theater was the only place that didn’t segregate them. Restoring the Dunbar is part of the McAdams neighborhood revitalization plan.

The former Keen Kutter factory is now the Hotel at Old Town, a very walkable neighborhood. Commemorate a slice of Kansas civil rights history at the Ambassador Hotel. It sits where students challenged segregation at a lunch counter. For a more intimate experience, stay at Riverside Park Cottage.

If you have plenty of time to explore, camp at the extended-stay K&R RV Park.

Try our list of nine best places to eat in Wichita, but add The Donut Whole, Scotch & Sirloin, and the Bella Luna Café.

Buy a Wichita-themed souvenir, like a miniature of The Keeper, at The Workroom. When you see the souvenir, remember that sweet dreams are made in Wichita.

Learn more about South Central Kansas, Kansas, and the Midwest. 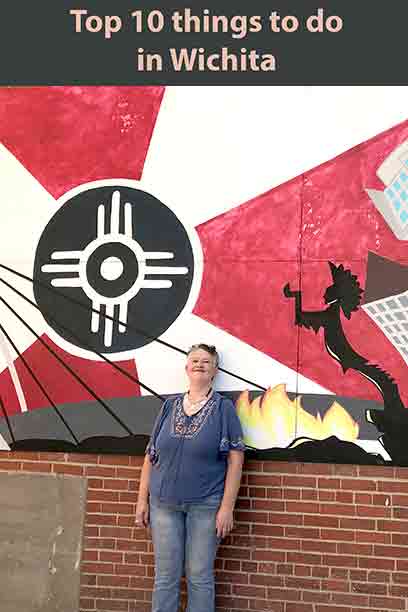