Work with us and grow your community

We’ll put your community into the spotlight. We believe tourism equals economic development. We have the passion and experience to help your community shine. We want you to prosper.

Work with us because we understand your challenges

Roxie is the primary writer for Roxie on the Road, an Expert Contributor for Travel Awaits.com, and a Destination Expert for TraveltheSouth.com. She co-authored the book Midwest Road Trip Adventures and the best-selling book 100 Things to Do in Kansas Before You Die. The 100 Things book sold its first printing in two months. Its success led to another book contract, Kansas Secrets: The Weird, Wonderful and Obscure.

Before Roxie became a travel writer, she worked with destination marketing organizations.

Roxie’s DMO years were full of accomplishment. Along with two other counties, her office helped to establish the Land & Sky Scenic Byway. Designating a byway requires a huge amount of paperwork. Kansas Department of Transportation approved the byway’s application in record time. Plus, she designed numerous publications, logos, banners, and billboards. Her office won numerous awards. The awards included wins in print marketing and digital marketing. The digital-marketing awards included social media. Through her DMO experience, she’s learned how to create strong marketing pieces.

During the same time, she also served as the administrator for a large tourism coalition. She made sure all the organization’s projects were accomplished. She and the members developed travel bloggers’ itineraries and worked with the attractions that those itineraries included. She’ll complete your projects, too.

Ten years in newspapers taught Roxie how the media works. She was a sportswriter for four years and an editor for six. Newspaper people understand deadlines. The media is always in need of good stories. With 10 years of making deadlines, she learned how to meet deadlines. She can provide high-quality stories, along with the photos that make a story extra compelling.

Let’s build your brand together

Roxie has loved every second of her career. She would love to use what she’s learned to help you.

Work with us and let’s build your brand together.

Work with us and let us shower recognition on you

Everywhere we’ve been, we’ve earned honors and awards. We would not receive any honors without the organizations we’ve worked for. We wouldn’t deserve honors without quality work and quality people to work with. Our goal is not to win more recognition. Our goal is for you and your community to receive recognition. We shine best when you shine brightest. Let’s talk about how we can work together.

2022 — Authored the book Secret Kansas: A Guide to the Weird, Wonderful, and Obscure. Signed contracts to write Historic Roadside Kansas and Amazing Kansas.

2022 — Received the Kansas Leader of the Year Award in the Creative Arts category from the Huck Boyd Institute for Rural Development.

2021 — Authored the book 100 Things to Do in Kansas Before You Die. Signed a contract to write the book Secret Kansas: A Guide to the Weird, Wonderful, and Obscure. 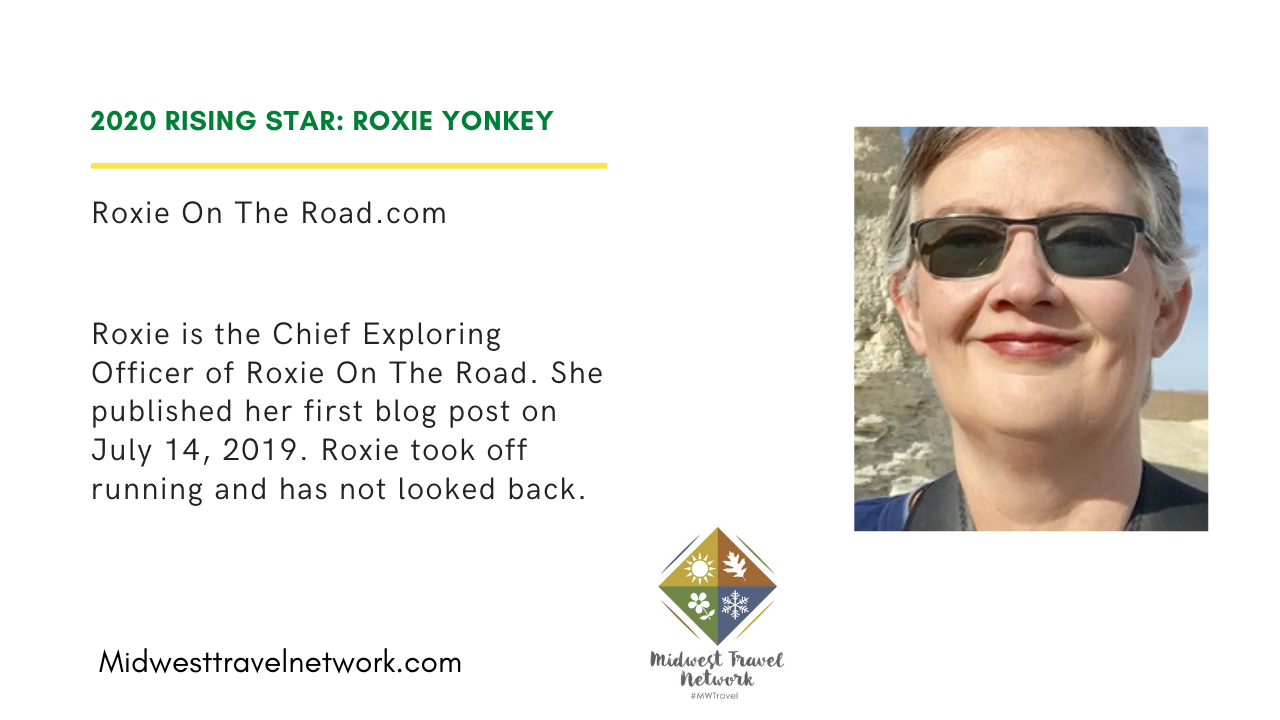 2020 — Received Midwest Travel Network’s Rising Star Award for travel bloggers who have been in business for two years or less.

2020 — Named honorable mention Interpretation Award as part of the Kansas Byways Program’s new kiosks and interpretive panels. Many of Roxie’s photos were included on Land and Sky’s panels.

2017 — Won the WeKan! Award from Kansas Sampler Foundation. WeKan! recipients “have a cooperative spirit, show enthusiasm and dedication for their community, and [their] efforts have made a real difference in rural Kansas.” The award has no nomination process and is given once in a lifetime.

2016 — Placed first and second in the Summer category in the Kansas Department of Agriculture’s photo contest.

2000 — Third place in sports coverage by KPA’s Weekly Division I.

1998 — Received Official Certificate of Congratulations from the Kansas House of Representatives.

1997 — Recognized for Distinguished Media Publicity from the Goodland Ambassadors Club.

1996 — Placed second in Best Use of More Than One Color’s Weekly Division from the Kansas Newspaper Advertising Association (KNAA).

1995 — Won General Excellence Award in KPA’s Weekly Division I. The award is given to the best newspaper in the category.

1991 — Received Black & Gold Award from Goodland High’s Girls Athletic Association. The award is given “for support and service to Goodland High School activities.”

1991 — Placed third in Commentary category in KPA’s Daily Division I.

1991 — Earned honorable mention for Sportswriting in KPA’s Daily Division I.

1989 — Named Best in the Nation for single-sport brochure in College Sports Information Directors of America (CoSIDA) Division B.

1989 — Named Best in the Nation for women’s field hockey brochure in CoSIDA Division B.

1988 — Named Fourth Best in the Nation from CoSIDA for men’s basketball brochure.