How to spend an exciting long weekend in Hays, Kansas

Hays is the unofficial capital of Northwest Kansas, about 300 miles east of Denver. The vibrant home of Fort Hays State University, the city offers fascinating history, architecture, art, and a robust dining scene. Surrounding Ellis County is full of spectacular churches and snippets of Western history.

If you haven’t visited Hays yet, you are missing out, and this is what you’re missing.

Note: This trip was partially hosted. All the opinions in this piece are my own, based on my experiences.

What to do in Hays, Kansas

Hays attractions begin with a famous fossil museum and extend through the Wild West. In the 1860s and 1870s, Hays was so violent that it had to build the first Boot Hill Cemetery. In a year and a half, Hays endured 30 homicides. With a little imagination, you can return to the Wild West on the Historic Hays Walking Tour downtown.

Hays is a much calmer place now. It’s safer than 75 percent of Kansas cities. In 2019, MSN named Hays as the state’s most beautiful downtown. We agree. Fort Hays State offers numerous cultural and athletic events.

Sternberg Museum: Mosasaurs and pteranodons and T. rexes, oh my!

In the Cretaceous Period, Kansas was covered with an ocean, the Western Interior Sea. Many terrifying creatures swam in this ocean and eventually became fossils. As soon as you walk in the door, look up to the Brachauchenius lucasi dangling from the ceiling. Its head is 5 feet long. Gee, B. lucasi, what big teeth you have!

George F. Sternberg excavated the museum’s most famous fossil, the Fish-Within-a-Fish, while he was the museum’s curator. The 14-foot Xiphactinus audax had eaten a six-foot Gillicus arcuatus fish for its final meal. Mr. X must have had a serious case of indigestion. (See rich fossil-bearing rocks in the Kansas Rocks Tour.)

While Mr. X’s final meal is a spectacular find, the museum’s greatest spectacle comes under the dome. A Tyrannosaurus rex stalks a herd of hadrosaurs as pteranodons fly above them. The dinosaurs move and roar. For those who have little children, please prepare them. We’ve witnessed terrified screaming children who believe the T. rex is real and ready to eat them.

If the toothy dinosaurs don’t scare you away, visit the museum’s rattlesnake exhibit. Over 40 rattlesnake species populate the world. Twenty-two species inhabit the United States. The staff changes out the individual snakes, so return to see a snake of a different color.

Pro tip: The museum is fully accessible, and wheelchairs are available at the admissions desk. Download a gallery map. If you come late in the day, visit the gift shop first; it closes before the rest of the museum does.

More than 600 soldiers called Fort Hays home, including such luminaries as Wild Bill Hickok, Buffalo Bill Cody, and George Armstrong Custer. The Seventh Cavalry and the 10th Cavalry were stationed here. The Seventh’s notoriety came later when it was decimated at the Battle of the Little Bighorn. The all-Black 10th earned the name Buffalo Soldiers. During the Battle of the Saline River, the 10th marched 113 miles without rations before the Cheyennes broke off the battle. John Denny was a Fort Hays Buffalo Soldier. Later, he earned the Medal of Honor in battle at Las Animas Canyon, New Mexico.

However, Fort Hays soldiers could not catch the fleeing Cheyennes before they raided Sheridan, Decatur, and Rawlins counties.

In 1990, the movie Dances With Wolves featured Fort Hays as Lt. John Dunbar’s starting point on his Fort Sedgwick journey. Unfortunately, the film crew shot those scenes south of Rapid City, South Dakota, not in Hays.

Fort Hays State Historic Site preserves the guardhouse, blockhouse, well, and two officer’s quarters. Start your visit with a video at the visitors center, then walk the grounds. Silhouettes explain activities at the fort. In the guardhouse, see exhibits about life at the fort and try on some Army uniforms.

Make sure to admire Pete Felten’s sculpture The Monarch of the Plains, a lofty bison near the fort’s entrance. A herd of real bison is across the road.

Fun fact: Elizabeth Polly nursed patients during a cholera outbreak in 1867. When she wasn’t helping the sick and dying, she liked to walk on Sentinel Hill southwest of the fort. She contracted the illness and requested to be buried on the hill she so enjoyed. Polly is said to haunt the hill. In 1982, the City of Hays dedicated Elizabeth Polly Park, which features Felten’s sculpture.

Pete Felten and a gallery of stone in Hays, Kansas

Felten sculptures are everywhere in Hays. For a more intimate artistic experience, visit his two-story Stone Gallery. The self-taught sculptor installed little bits of whimsy around his studio. If Felten is working in the studio, stop and chat with him. His work isn’t limited to sculpture. He paints, makes pottery, and shoots pictures. His work was a finalist in the Kansas Sampler Foundation’s 8 Wonders of Kansas Art contest. Tours are available with advance notice.

In the 1870s, the Volgadeutsch (Germans from Russia) left their century-long homes along the Volga River, where they had been invited by Catherine the Great. The current Tsar had revoked the privileges that had attracted the Germans to move, and they looked to Kansas for a new home. From 1870 to 1907, the Volgadeutsch made their homes in various cities and communities in Ellis County. Since wood was hard to find, many settlers built their homes from sod blocks. Visit the Volga German Haus on the Ellis County Historical Society grounds to see what life was like for early settlers. While at the museum, stroll through the Catharine Model Buildings Display.

The Volgadeutsch loved their churches, and they built breathtaking houses of worship. The buildings’ creativity and beauty are astounding. The Basilica of St. Fidelis in Victoria, 10 miles east of Hays, won 8 Wonders of Kansas status because of its grandeur. At its 1911 dedication, it was the largest church west of the Mississippi.

South of Victoria, the Holy Cross Catholic Church in Pfeifer won 8 Wonders of Kansas Architecture recognition for its Gothic splendors.

But don’t stop with those two churches. Enjoy a daylong excursion through parishioners’ devotion with this download.

Ellis County cemeteries are dotted with metal crosses. When the settlers came, wood was scarce and eventually rotted, while buying a tombstone was expensive. Instead, the settlers began marking graves with ornate metal crosses. Many of the crosses’ inscriptions were written in German. As you visit the cemeteries, note the different cross styles.

In 1873, George Grant arrived with a vision for Victoria. He intended to create a cattle and sheep ranching paradise for English nobility in Ellis County. A hunt club, cricket pitch, and a racetrack appeared near Victoria, while Grant moved into a fine English-style home. But the nobility didn’t show a lot of interest in work. Eventually, the noble Britishers returned to Great Britain, and Grant lost his fortune. His home still stands. Nearby, a small monument honors Grant as the man who brought Aberdeen Angus cattle to the United States. However, that status is controversial.

During the settlement period, numbers determined safety. Seven railroad workers learned that lesson at the cost of their lives. On Aug. 1, 1867, the seven were a detached crew away from the main camp. They were unarmed, and Cheyenne warriors killed six of them on site. A seventh made it to Fort Hays, where he died. His report sparked the Battle of the Saline River. A little cemetery south of Victoria holds the remains of the six who didn’t reach the fort, plus five stones for the Seth family’s children, who died of typhoid in 1873.

Travel through transportation time in Ellis

The Kansas Pacific Railroad laid out the City of Ellis in 1873. Later, the city 13 miles west of Hays became the dividing point between the railroad’s Kansas Division and Colorado Division. The Ellis Railroad Museum holds a minutely detailed model railroad and a plethora of railroad memorabilia items. During the summer, the museum operates a miniature railroad. A large doll collection fills the museum’s upper floors.

Walter P. Chrysler grew up in Ellis, where his father was a railroad engineer. The younger Chrysler became a railroad mechanic and later turned his skills to automobile manufacturing. The Chrysler home in Ellis is now a museum holding numerous personal and corporate memorabilia items. We had no idea that the Chrysler Corporation had contributed so much to the space race until we visited.

Where to shop in Hays, Kansas

Un-ordinary and well designed: Be Made Mercantile

For fun and quirky apparel and home decor items, make Be Made your first stop. Discover items in the Farmhouse, Boho, Eclectic, and Plantastic styles, and be sure to check out their match selection. You’ll be amazed by how hot and fun matches can be.

At The Niche, instructors lead students as they create step-by-step painting and crafts projects. Or take home a kit. Your kids will enjoy their own projects.

Madd Matter is one of my favorite stores anywhere. Browse their original artworks and prints and admire their elegant framing. I always enjoy seeing how their framing accents their customers’ precious objects.

Where to eat in Hays, Kansas

The list of excellent Hays eateries is long, but the best are downtown or near 27th and Vine. Deciding which to recommend is difficult, but these are our favorites.

Downtown Hays was in bad shape when Gella’s Diner and Lb. Brewing Co. started. Downtown had only a few businesses and many of the buildings were in disrepair. What would become Gella’s had a collapsed roof. Three months after the brewpub opened, Lb.’s Oatmeal Stout won a silver medal at the Great American Beer Fest. The traffic to Gella’s brought up the entire downtown. My favorite brews are their Hefeweizen and their raspberry wheat. I always order the creamed spinach. Try the smothered bierock, which is a round meat pie, and the Brewben.

Tiger Burgers, where The Wizard of Oz meets Route 66

Thirteen miles of Route 66 bisects the very southeast corner of Kansas, a long way from Hays. But when you approach Tiger Burgers, you’ll feel the pull of the blue highways. The restaurant is in a converted vintage gas station, and the decor is filled with neon, vintage tin signs, and petroliana. Their menu offers twists on diner classics, with names from The Wizard of Oz. Try the Dorthy Melt and the onion scoops.

Take your pick of three divine eateries in the same building. The first one, Guiterrez Cocina Mexicana, is a Hays institution. They have served their authentic family recipes for 50 years. Start with queso de capa, continue with the Bandera enchilada platter, and finish with the cherry tortilla cheesecake. Drink a shaken black raspberry margarita.

TRIO Tap House feels like a neighborhood pub. Start with the bacon cheddar potato skins. Choose one of their dry-aged steaks and finish with their bananas Foster cheesecake. Drink the Ol’ 48 Prohibition Lemonade. Why 48? Kansas didn’t end Prohibition until 1948, 15 years after the national experiment with banning alcohol had ended.

A short walk will bring you to Popt, heaven for popcorn lovers. Buy a tin to bring home. Add some fudge to your order.

Where to stay in Hays, Kansas

Hays’ growth has attracted numerous chain hotels. The Hilton Garden Inn is the newest hotel in Hays. Enjoy a tasty snack at their Garden Grille & Bar. The potstickers are delicious. The Hampton Inn is nearby. Camp at Hays’ newest RV park, Creek Side Resort.

Fascinating Rooks County is a short drive north of Hays. Explore more of Northwest Kansas, the rest of Kansas, including Wichita and Kansas City; and the Midwest. Enjoy a tour guide on your Kansas and Midwest adventure in the Midwest Road Trip Adventures book and enjoy appropriate music.

I am an Amazon Affiliate and the book’s author. As an affiliate, I receive a commission at no cost to you.

Pin this to save it for later. 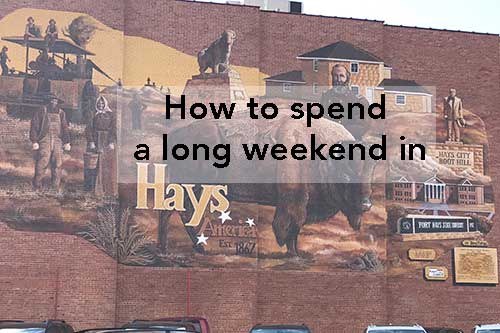